How Good is Jaime?

4 Comments Posted by Angela Ivie on May 19, 2010
Spending the last four days without any internet connection was absolute torture, because it meant I was completely cut off from baseball. The only baseball I could find solace in was in the texts I received from various sources, 15 second Cardinal highlights on Sportscenter, and the six Nationals hats I saw while wandering DC. Don’t try to tell me they give a rip about baseball out there…

I’ve been working on a little project that was suggested to me as a possible topic for the blog a week or so ago. The challenge: put together a comparison between Jaime Garcia’s first 7 games and the first 7 of some of the more well-known rookie Cardinal pitchers of the past. I realize that Jaime has now pitched 8 games, but I got the research before I left town, so 7 it is. My criteria was fairly simple: players included (roughly) one starting pitcher for each decade and they had to come up through the St. Louis farm system. The later names I’m sure most of you know, but the earlier names might be a little unfamiliar, so here are bios on all the boys. 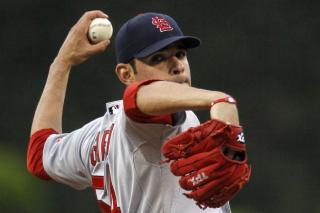 Jaime Garcia (full rookie year: 2010) – Jaime was selected in the 22nd round of the 2005 draft. He came up for one start and a handful of relief appearances in 2008, then was shut down for almost all of 2009 after having Tommy John surgery. He came back to pitch well at the end of 2009, and won a place in the starting five coming out of Spring Training this year.


Rick Ankiel (2000) – Rick was signed out of high school and given a $2.5 million signing bonus, which the Cardinals had not ever seen before nor have paid since. He was 2nd in Rookie of the Year voting in 2000 and struck out almost 10 batters per 9 using a devastating curveball, a mid-to-high 90’s fastball and a sharp sinker. He fell apart in the NLDS, throwing 5 wild pitches in 1 inning against the Braves. 5 more went to the backstop in game 2 of the NLCS against the Mets, and things did not improve in 2001 for Rick. He went back to the minors and… well, you know him now as Rick Ankiel, centerfielder for the Kansas City Royals. To quote Harry Doyle in Major League 2, “It’s a funny game, eh Monty?”


Matt Morris (1997) – Matty Mo was taken 12th overall in the 1995 draft, and didn’t waste time becoming a fan favorite in St. Louis. He pitched well for a few years, underwent Tommy John in 1999, then won 22 games in 2001, made the first of his two All-Star appearances, came in 3rd for the Cy Young and won the Comeback Player of the Year award. After 2005 he signed a 3 year deal with the Giants, and was traded to the Pirates before retiring in 2008.


Danny Cox (1983) – Danny was drafted in the 13th round of the 1981 draft. His numbers fluctuated a little over his first 5 years, then he dropped off the radar completely after 1988, when he underwent shoulder surgery and was released by the Cardinals. After recovering from surgery he was a changed pitcher, found himself in Philly, Pittsburgh and Toronto and finished his career as a rarely used relief pitcher.


Bob Forsch (1974) – Forsch was taken in the 26th round of the 1968 draft. He is one of few pitchers to pitch two no-hitters in his career, both of them coming at Busch II. These are also the only two no-hitters pitched in Busch II. His brother, Ken, was also a pitcher and also pitched a no-hitter, making the Forsch brothers the only set of brothers to ever accomplish this feat. Bob was a ‘better’ hitting pitcher, holding down a .213 batting average and winning two Silver Sluggers in his career.


Steve Carlton (1966) – Carlton was brought on as an unsigned free agent in 1963. Were it not for contract disputes with the volatile Gussie Busch, Steve wouldn’t be remembered as one of the greatest Phillie pitchers of all time. He was already a 2 time All-Star by the time 1970 rolled around, however he held out during Spring Training, then lasted through 1971 before Gussie had him traded to the Phils, in what many consider to be the worst trade the Cardinals have ever made (yes, worse than Mulder, for you more recent fans).


Larry Jaster (1966) – Jaster was signed as an undrafted free agent in 1962, and spent a few years in the minors before getting the call in late 1965. In his rookie year alone he shut out the Dodgers 5 times – and the Dodgers won the pennant in ’66! He had another solid year in 1967, but never matched up to those first two full years. Jaster found himself in Atlanta in 1970 where he made 14 relief appearances, then appeared in 5 more games in 1972 and was out of baseball after that – at only age 28. Fun fact: Jaster was the first pitcher to throw a pitch in Canada.

Bob Gibson (1959) – If I tried to say 5 words on Hoot, I’d talk for 5 paragraphs. I defer you instead to the box at the right, noting all of Gibson’s highlights. Add ‘Hall of Fame’ to that résumé as well, if you would.


Dizzy Dean (1932) – Ol’ Diz is in a class by himself. He was one of the leaders of the Gashouse Gang of the 1930’s, and his colorful antics and bizarre way with words made him both endearing and irritating to all who tried to follow him. Along with his brother Paul, Diz predicted that the two of them would combine to win 45 games in a season – and they did! If you’re looking for some lighthearted fun in baseball history – look no further than Dizzy Dean.


Those were the boys (and yes, there will be a quiz). Now for the statistics! Putting the stats together was time-consuming, hence my unwillingness to add in an 8th start to every pitcher. For several, the ‘first seven’ for each pitcher sometimes spanned a couple of different seasons. The year listed is the year that they had their first full season.

So, how good is Jaime? He leads this rather spectacular group in ERA, runs, earned runs, hits allowed, batting average against, on base percentage and on base plus slugging. Ol’ Diz had a leg up on the slugging line, as he played in the ‘Dead Ball Era,’ otherwise Garcia would have had a clean sweep on the percentages. I feel that the most true number here to balance out innings pitched (among other factors) is to note the WHIP (walks plus hits per inning pitched) line. While Jaime does not lead that category, pulling second in that ferocious lineup is still quite impressive.
Bottom line – do I or anyone else expect Jaime Garcia to continue running these kind of numbers up the scoreboard? No, of course not. All of the players in this study went on to have very different careers. Some became Hall of Famers, some saw their careers end far too soon, and there’s always Ankiel. What I am saying is that our current rook is definitely making his case to be something special, and I know I’m not the only one out there who is ‘honking for Jaime.’

4 responses to “How Good is Jaime?”