Truth and Consequences, Plus Some Fun

4 Comments Posted by Erika Lynn on July 23, 2010
RUMOR:
No Cardinals blog would be complete without at least mentioning the current rumor that the Cardinals are looking to make a deal with the Astros for their star pitcher Roy Oswalt before the July 31st trade deadline. And apparently Mr. Oswalt favors the Cardinals as well? Sounds like a match made in baseball heaven to me… as long the front office can avoid the hurdles of budgetary constraints (with Albert Pujols’ epic contract negotiations looming) and depletion of the farm system. This one sure got the chatter going.  What if???

Ryan Ludwick, who last played with the Cardinals on June 25th, says he could be back with the club by the weekend.  After spending nearly a month on the disabled list with a strained calf, Luddy has shown he still has what it takes, hitting two homeruns in two games during his rehab stint at AAA Memphis.
Welcome back Ludwick!!  We would all love to watch you and Hunky Matt Holliday have your own version of a Cardinals HomeRun Derby throughout the coming months.
DILEMMA:
With the return of Ryan Ludwick, the question is which player gets bumped back down to AAA?  Jon Jay has been the darling of the BabyBirds in the big leagues, batting .462 since his July return.  Allen Craig has had 6 rbi and a homerun during his recent 5 games with the Cardinals, batting .286. Tyler Greene will likely stick around as platoon in the infield until David Freese returns to action.  So, my guess is that Allen Craig will be getting his mail in Memphis again.  But then again, we never know…

CHECK OUT THE INK!

Jason LaRue may be rocking the clean cut look lately, but video from Wednesday gave us a sight we rarely see.  The biker boy has tattoos!  I guess I should not have been surprised, but for some reason I was?!  That’s a lot of ink Jason! 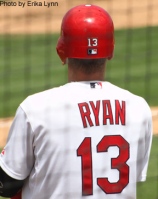 Finally!  POSITIVE BRENDAN NEWS:
Buried at the bottom of a MLB Cardinals news report on July 21st was this tidbit:
“Courtesy of the Cardinals media relations, Brendan Ryan leads all middle infielders with eight double plays turned since the All-Star break.”
Sometimes you just have to focus on the good.
Yay Brendan!!
Today the Cardinals face the cubs at Wrigley Field for another afternoon matchup. Game time 1:20pm CT.
How about another 8 game winning streak?
GO CARDS!   =)

4 responses to “Truth and Consequences, Plus Some Fun”