Welcome to the Bigs, Kid. Good Luck With This.

Could someone explain to me when Tony went from the one that doesn’t trust rookies and young guys to the one trying to kill pitchers arms and spirits a la Dusty Baker?

First of all, the Cards have got an inordinate amount of infielders (or outfielders being used as infielders) on this team. So why is the backup catcher starting at third base? Why on a team boasting 7 guys that have played infield this year (and 4 of which have started or played third) was that at all necessary? This was one of those starting lineups that Tony pulled out of a hat, wasn’t it?

Poor Lance Lynn. Making his major league debut starting on just 3 days rest. He was actually very efficient, throwing only 64 pitches in his 5 1/3 innings of work. However, when he was getting lit up in the sixth, and the crack team doing play by play for Fox Sports Midwest kept repeatedly stating that there was no one warming up in the bullpen, I got frustrated again. Now, I know I ranted yesterday about how the starting pitchers are having issue lately getting deep into games, and the bullpen looks worn out. That issue has obviously not changed since then. So the team says, “Hey, let’s bring up another arm and have 13 pitchers, thereby allowing guys to get a breather!’

Solid idea, right? Well, I’m actually never on board with having 13 pitchers on the roster. Ever. However, in the last seven games…

Individually it doesn’t seem like a lot, but add it up. Over 7 games the pen has taken on 27 2/3 innings, and that doesn’t even include the 2 that Maikel Cleto took on last night (I’ll get to him). So the pen has handled almost 30 of 64 innings (counting extras) over the last seven days. I can understand the feeling of needing an extra arm for a few days. So what does the team do?

Call up Maikel Cleto. Force a kid to skip AAA and run straight to the bigs despite the fact that there are 4 arms in AAA that are on the 40 man, including 2 (Mitchell Boggs and Jess Todd) that have big league experience. Makes perfect sense. The book on Cleto is simple – he throws the ball fast. Caveman style. Me throw ball fast. He has no idea where it’s going, and, when he’s at all worked up, excited, or even just thinking about what kind of food is going to be on the postgame spread, he has even less of a clue. He just winds up and throws it. Fast.

Hey kid. In the bigs? They can hit fastballs.

It was setting him up for failure in a big way. I don’t like it. He showed us something big in being able to calm down and come out for a solid second inning, but wow, was I cringing to see him get run back out there.

This makes two posts in two days from me… both of the ranting variety. I should cut it out or you’re all going to think I a) like writing and b) need to get out more.

Thankfully we are finished with the Giants for the year. Up next are the boys from the north side – the Cubs. The boys in blue have lost their last three (to the hapless Astros no less) and are 3-7 in their last ten games. Old friend Ryan  Dempster takes the mound for the Cubbies, while Jaime Garcia looks to bounce back from arguably his toughest start of his career. Gametime is at 7:15. Go Cards! 🙂

Thoughts That I Need To Let Go Of

I have a few thoughts in mind right now… one of them might turn into something, but it’s been a busy week, school is out, and this teacher has turned her brain OFF, so we’ll see…

No Colby, Albert's not laughing with you... he's laughing at your hair. (Photo by Dilip Vishwanat/Getty Images)

-> Brendan Ryan is currently batting .275 for the Mariners with 4 errors in 235 chances, while Ryan Theriot is batting .298 with 10 errors in 202 chances. You know, I know, everyone knows that we were in love with Brendo over here……… but (Erika don’t read the rest of this sentence) Brendan couldn’t do what he’s doing in Seattle in St. Louis. Okay, he could, he’s capable, but he wore out his welcome with his teammates and his manager. He could have stuck around this year, but I’m not sure it would have made a difference. I don’t particularly care for Ryan Theriot. I have made peace with this though, especially with his 15 game hitting streak and his not really being a dud in the field as of late. (I was born in the Show Me State after all… and I’m from the ‘what have you done for me lately?’ generation)

-> Yadi’s defense has been bothering me all year. He’s not making throws as crisply as he used to make them, and he hasn’t blocked some pitches that I feel like he should be blocking. It’s a concern. However, he’s batting .320 and has 24 RBI. I find it much harder to be concerned when I am be distracted by that fact. Truth.

-> I want to like Tyler Greene. I really do. I just can’t make myself do it. Even when he makes good plays or gets a key hit – my brain flashes to his dropped popups and things of that nature, and I just get irritated. Also, I really don’t like it when Allen Craig starts at second base and then gets subbed for in the later innings, especially by Greene. What are you subbing for – defense? He hasn’t made an error today. Offense? He has one of the best hitting lines on the team. Defense? He has zero errors. As friend of the site Bob Netherton pointed out on twitter yesterday – Craig is no longer a AAAA player. Subbing him out of the game is completely unnecessary.

-> Also, I like Craig at second. I really like him there, and I like him in the lineup on a consistent basis. Or Dirty Danny D at second – him too. With Holliday going on the DL, do you know who I want as the 4th outfielder behind Rasmus, Berkman, and Jay? Skip. Schumaker.

-> I’m concerned about the pitching staff at the moment. In the last six games, no pitcher has made it past six innings, and Lohse is the only one that did that. Westbrook’s last two starts were 5 2/3 and 5. Carpenter’s last one was 5. McClellan? 4. Jaime? 3 1/3. This is not a recipe for success. The reason the team was surviving the low-scoring games was the starting pitching going 7 or 8 innings every night. To top it off, Lance Lynn is starting tonight on three days rest. That makes me nervous. I will be seriously pulling for the kid, but I will also be very nervous.

-> Finally, I want to know how this stayed hidden from Erika and myself until yesterday. HOW LONG had this been out before we were made aware of it? (To see the full issue click here or the behind the scenes video here!) 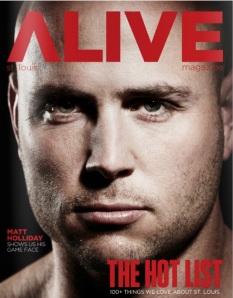 Cards are still playing the Giants? I’m ready for this series to be done!

Agree? Disagree? Think I’m a little off my rocker lately? Say so in the comments!