The last day of school, the start of summer… Life-changing events for kids and parents.  This year we planned an exciting launch to summer with a momentous pilgrimage: an 8-hour journey to the Motherland …. Busch Stadium.
I am proudly raising two enthusiastic young baseball fans and am thrilled that Cardinals baseball has become a family interest.  We watch the games together on television and talk about all the Cardinals news and chatter.  So taking our kiddos to Busch Stadium for their inaugural FIRST game at Busch Stadium was a family milestone.
First on the agenda: a tour of Busch stadium.

Last Wednesday, we joined the earliest tour of the morning, a small group of 8-10 people and ours were the only children. (An elementary school field trip filled the next tour group, so we were feeling very blessed!)  We entered a peaceful, quiet Busch stadium, empty except for the grounds crew and a handful of employees cleaning the ballpark.  The view of the ballpark in the early morning was breathtaking and was a perfect introduction to what would later be a loud cheering stadium filled with that familiar sea of red. Our tour guide led us through various areas of Busch stadium including Mike Shannon’s broadcast booth, the Champions Club, Musial’s bridge and onto the field, dispersing tidbits of Cardinals history along the way.
Favorite part of the tour?
Hands down, the dugout!  The kids loved standing on the steps where they had seen Albert Pujols, Matt Holliday, Chris Carpenter, Adam Wainwright and all the boys lean over the fence during games.  There was a special excitement in touching the phones Tony LaRussa uses to call the bullpen as well as sitting on the wooden dugout benches scarred by the cleats of countless Cardinals ballplayers.
*side note: if planning to take a stadium tour, be forewarned that it does NOT include a tour of the clubhouse (except during Winter Warm Up)
Next on our Cardinals Baseball Trip Agenda:
After the tour we ventured into the team store and did our best to contribute to the ‘Keep Albert Pujols’ fund, buying up far too much of the must-have Cardinals gear that can’t be found in our Oklahoma hometown!
On our road trip into St. Louis we had collected our Mobil On The Run 25-cent drinks, compliments of the Cardinals’ 6-run win over Washington on Monday.  And after our stadium tour, we continued our Cardinal broadcast commercial experience with lunch at Imo’s Pizza.  Driving past a Schnucks (non-existent in Oklahoma) also sent the backseat into a flurry of excitement.  Obviously advertising dollars spent during Cardinals games works – at least on this family!  =)
Pregame Adventures: 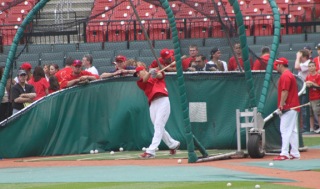 Batting practice before Wednesday’s game brought its own share of excitement. Cardinals sluggers Ryan Ludwick, Matt Holliday and Nick Stavinoha were all firing shots into the stands.  Several of the balls that didn’t make it into the seats were tossed up to fans by players on the field.  A Marlins player threw a baseball to my son, but sadly, moments later, the ball fell out of his glove, back over the wall.  Twice we ‘almost’ caught other balls hit into the stands, but a teenage boy stuck his glove right in front of ours, stealing the catch and the baseballs away at the last second.  So, despite our attempts to catch another, we left with merely a good story instead of a batting practice baseball.
The Real Deal:  Baseball at Busch Stadium:
Even with drizzly and cool weather for Wednesday and Thursday’s games against the Florida Marlins, we were happy to be in the stands cheering on our Cardinals.  Hot chocolate may have helped, but the energy in the stands overcame the chill, and the kids were having fun, focused on the game and cheering for the players by name. I could not have been more proud of my little Cardinals fans!  They sang along to Matt Holliday’s walk up song, cheered their hearts out for Brendan Ryan, David Freese and the ‘Boys’, and they marveled as the wave made it all the way around the stadium.  They also worked feverishly to punch out their votes on as many All Star ballots as they could collect.  (I’m predicting an all-Cardinals team right now…)
Looking Back on It All:
The time in St. Louis flew by too quickly.  While we did visit the arch and enjoyed wandering through City Park and the streets between our hotel and the stadium, there was much left undone.  So, happily I can say that more family trips to St. Louis and Busch Stadium will definitely be in our future!

The one memory I will forever cherish was watching the excitement of my kids as they hung on the Cardinals dugout fence, thoughtfully looking out over the field at Busch Stadium in that early morning light.  I have visited Busch Stadium before, but it was truly magical to see it through the eyes of children experiencing it for the first time.  I hope this is just the beginning of their love affair with baseball and that some day they too will be able to pass it down to another generation.
To help pass the time during a baseball ‘off-day’ today, here is a photo slideshow from our trip.
Highlights include:
1-     Joe Mather in high socks
2-     Brendan Ryan and Felipe Lopez & their victory happy dance handshake
3-     David Freese and a killer grin
4-     Yadier Molina visits Jaime Garcia
5-     Albert Pujols, Matt Holliday, Nick Stavinoha and more…
Enjoy!  =)
GO CARDS!