Cards At The K

If you’ve never been to a game at the beautiful Kauffman Stadium in Kansas City, you truly are missing out. Now, I wrote about the Cardinals’ rivalry with the Royals over at Baseball Digest, so I won’t rehash it, but despite the score, it was really a fun atmosphere down at the K last night. To start – here was the scene around the third inning last night:

As you can see, there are an awful lot of red shirts in the seats, to the point where the ‘LET’S go CARDinals! *clap*clap*clapclapclap*’ chants  were much better than anything the Royals PA could put together.

Don’t forget (although you want to) – the Royals won. They were just overpowered in the stands. I heard several mentions on my way into the stadium about how cool it was to see the ‘sea of red’ taking over the parking lots. (To be fair, season ticket holders and anyone buying a ticket package park in a different lot.)


I wasn’t going to say anything, but I have to – Royals fans moan about how Cardinal fans need to get over 1985, but if they don’t quit wearing their 25 year old world championship t-shirts pretty soon, the shirts will start showing up at the park sans-owners. That leads perfectly into my list of FANS OF THE GAME!


1st Place: This gentleman (that’s a kind word) was sitting next to my family. The front of his shirt had 2 dead birds hanging off a bat. This is the back: 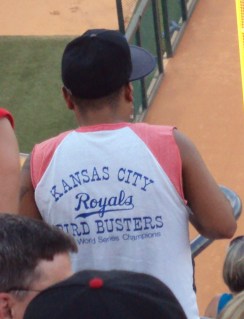 2nd Place: I’m amazed that I didn’t notice this man until the 7th inning stretch. Maybe it’s because I see him every year. No joke. Then again, when were Beanie Babies last cool – 2001? I also enjoy that he is wearing a KU championship shirt instead of a Royals shirt. Convenient for when the score is reversed, ehh?

3rd Place: Sadly, I don’t have this one (not for lack of trying), but this one goes to the two buddies that were wearing Royal blue Denkinger shirts. Number 85, of course.

Honorable Mention: I feel the need to notice the following good Cardinal folks that made the trek: the Scott Spiezio jersey, the 2 Chris Duncan jerseys (2? In the same section? But not together? Madness!), and the 2 year old in the Rick Ankiel jersey. Friends, wait to buy player jerseys for your kids until they fit into them. Don’t plan ahead, or if you do, go for a franchise player!

All jokes aside, I truly do enjoy going to games in Kansas City. I’ve been to enough games over the years and have enjoyed seats from the 4th row to the 4th deck. I’m telling you – there is not a bad view no matter where you sit. I like sitting way up high because you can take in everything at once, from the shift of the infield to the action in both bullpens. The Royals have done very extensive renovations in their outfield over the past few years. If you haven’t been recently – here’s the view of the outfield area:

The right field area is the place to be in my mind. On hot days the Pepsi Party Porch will give you a nice mist when the fountains are on, and the whole outfield area is now open with different attractions and places to stand and watch the games. I’d venture that about 75% (probably more) of the people wandering around out there during the game actually have seats, but never sit in them. Even compared to games that I attended here 5 years ago, this is a much more fan-friendly atmosphere now.

Friday nights are the best nights, because the Royals do a pretty spectacular fireworks show that you do not want to miss! It’s not quite to the standards of the 4th of July at the Arch, but it is worth seeing, every time!

So for any of you out there that are going to be at either of the next two games, see ya there (I’ll be one of the ones not sitting in a seat), enjoy the stadium, and help me bring home some winners!